I recently read an article that got me thinking, modern farmers no longer fit the classic stereotype.  We don’t wear bib overalls everywhere or eat solely biscuits and gravy. Modern-day farmers aren’t just men with calloused hands and dirt on their knees.  Today’s farmers come in all shapes and sizes.  There are women farmers and men farmers.  Farmers who are old and farmers who are young.  And farmers who have hobbies and interests other than farming.  In fact, you may not even recognize a farmer when you see one.  If you came knocking on my door on any typical night you would likely find me painting my nails with glitter and snapchatting my friend about the latest episode of Real Housewives of New Jersey.  Pretty girly, non-farmer kind of stuff (However, I will admit that the glitter nail polish does hide the dirt under my nails quite well).

I decided to share some stories from a few of my farmer friends to show you exactly what I mean.  Go ahead, read all about them.  Would you have guessed their profession was “farmer” by just looking at them?

Justen is a third generation crop farmer who runs 1100 acres of corn and soybeans in Wisconsin.  He utilizes the latest technology such as application controls and guidance controls to increase productivity and profitability.  Justen also works full time as an engineer at a fabrication company and when he isn’t in the tractor seat or office chair, he can be found on the seat of his Harley.  Justen enjoys spending his free time riding his motorcycle through the countryside and visiting different towns with his fiancé.  Modern farming practices and technology allow him to do this.  Justen says, “For me, modern technology frees up more time to do things other than farm.  Successful farmers have found what is profitable, modernized it and bought a set of golf clubs or a Harley”.

My dad is a fourth generation dairy farmer from WI.  The family farm milks 1500 Holsteins and employs about 40 people.  My dad’s primary duties are to oversee, well, basically everything and take care of the breeding age heifers.  He spends a lot of time delegating farm duties and making sure the cows are happy and healthy.  If you can’t find him in the barn, you better check the closest golf course.  Golf is one of my dad’s favorite hobbies and he tries to get out on the course as much as possible.  Todd says, “What allows me to do all the things I enjoy is a dedicated staff that has the same passion I do…making cows happy!”.  Who would have thought this guy in plaid shorts and a visor was a dairy farmer?

Celsey and Noah farm with Noah’s family in western Wisconsin.  Currently, Noah’s parents are sole owner’s of the dairy farm, however, Noah and his brother are in the process of buying into the operation.  The family milks 1,000 dairy cows three times per day and enjoys farm life.  If the couple isn’t tending to newborn calves at night, you might see them head banging at a rock concert.  That’s right, not all farmers are die-hard country music fans.  Celsey and Noah enjoy attending various rock concerts when they can.  Advancements in technology and good help allow them to get away every once in awhile.  Next time you a rockin’ out at a Avenged Sevenfold concert, be aware that the person next to you may have just finished assisting in the birth of a newborn calf.

Jessica grew up working on her family’s dairy farm of 100 registered Holsteins.  The farm was established by her great-grandfather and is currently being operated by Jessica’s brother.  Jessica grew up with a passion for show cattle, genetics and hard work; she took this passion and made it her career.  Jessica now works for a company that specializes in dairy genetics and helps farmers mate and produce quality dairy cows.  While attending college, Jessica became involved in a variety of activities, including softball, and her love for sports grew. After college, her job took her to Madison and she became involved in a women’s football league.  Jessica still goes home and helps on the family farm, but also loves playing sports and being outdoors.  Jessica says, ” I guess you could say on the outside I don’t look like your typical farmer, however my passion for the dairy industry and agriculture is embedded in my roots.”.

Originally from Holland, Wiebe moved to the U.S. in 2002 to dairy farm. While Wiebe has been a dairy farmer for most of his life, there was a period when he worked as a dairy nutrionist.  Currently, Wiebe manages a dairy farm that milks 1,250 cows in Wisconsin.  When Wiebe isn’t wearing his work boots, he likely has his skates on; one of Wiebe’s hobbies is speed skating.  A farmer that speed skates?  Who would have thought?!  Speed skating is something Wiebe has enjoyed doing since he could walk.  Wiebe has recently begun teaching his youngest daughter to skate, perhaps we have a future Olympian in our sights?

Today’s farmers are breaking the classic stereotype.  While farming and agriculture is their primary passion, they are taking up other hobbies and improving their quality of life.  It seems that advancements in technology and modernization of agriculture is allowing folks to do more off the farm.  Next time you are on the golf course or at a concert, strike up conversation with the stranger near you.  You might be surprised to find out just who you are standing next to.

Are you a non-stereotypical farmer or do you know one?  Share your stories! 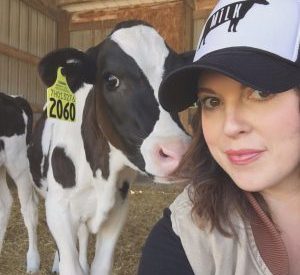