Milk Fever.  No, it is not the intense craving you get for a glass of ice-cold milk or the belly ache you feel after competing in a milk drinking contest at the county fair.  Milk fever is a metabolic disorder caused by a low blood calcium level and is common among cows who are close to calving or recently gave birth.  We do our best to prevent the occurrence of milk fever, but occasionally it happens. In fact, it just happened yesterday.

Most  cases occur within one day of calving because milk and colostrum production drain calcium (and other substances) from the blood, and some cows are unable to replace the calcium quickly enough.  Other factors that put cows at risk for milk fever are:

We noticed 4054 was in labor and moved her into a calving pen.  Old 4054 was a textbook case of a cow with milk fever; she is an older cow in her 5th lactation, a bit overweight, and was a high yielding milk producer last lactation.  Like a said, a classic case.  On her way to the calving pen she fell down and wasn’t able to get back up, a common sign of milk fever.  Other signs include:

Luckily this disorder is easily treatable and we were prepared.  My husband quickly began warming up a bottle of Calcium gluconate  and prepared to IV the down cow.  By administering calcium intravenously we were able to replace her blood calcium level and within minutes she was back on her feet.  Cows normally respond to the treatment very quickly.

A couple of hours later 4054 gave birth to a healthy heifer calf and both are doing well today.  I am happy my husband and I were able to help this momma and  get her back to health.  Cows truly are domestic creatures and it makes me happy knowing we have a great herd of cattle that trust us to care for them and help them when they need it. 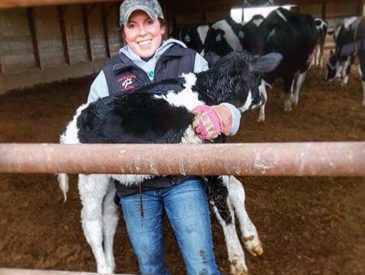